It was great to meet you this morning and thank you both for visiting me in Islington and showing me all three of your splendid London homes — in Chelsea, Piccadilly and Hyde Park. I expect you noticed that I am an exceedingly nosy person, so you can imagine what a kick I got out of seeing your priceless furniture and paintings, inspecting your bookcases and — this was the bit I liked best of all — rifling through your cupboards and drawers.Yet I hope you won’t be hurt if I tell you how relieved I was to get back to my own empty kitchen afterwards. I made myself a cup of tea, closed my eyes and sat quietly trying to collect myself before writing to you. 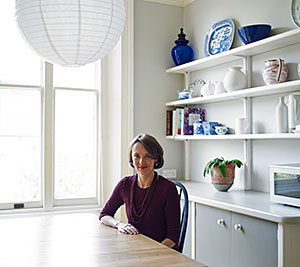 Lucy Kellaway in the kitchen of her home in London

In advance I had been warned that your approach to interior design was maximalist, but nothing had prepared me for the sheer volume of stuff you own. Your wife, who is a devotee of yoga, tells me that there is not enough floor in any of your houses on which to unroll a yoga mat. Sometimes she pushes the table to one side in the dining room in Chelsea, but even then there are chairs, enormous chandeliers, sideboards, occasional tables, paintings in bubble wrap leaning on the walls, seven hats, half a dozen Chinese clocks and a lot of electric cable. And it’s the sparsest room in the house.

I gathered from our conversation that you have five further houses — two in Hong Kong, two in Beijing and one in New York — and that a similar approach to stuff is evident in all of them. In addition, you have three warehouses to store additional belongings (two of which you have kept secret from your wife). Far from getting rid of things, you tell me you adore shopping and are adding to the pile. While your driver was taking us from one house to another, I overheard you saying you’ve just ordered another 12 shirts. What is it all about?

I know the question of clutter is partly a matter of personality. But wouldn’t life be simpler if you got rid of some of it? And not just simpler, wouldn’t you be able to appreciate the beauty of some of the things you owned, if there wasn’t so much of it?

As I explained to you earlier this morning when you inspected my house in London, I am a recent disciple of Marie Kondo, the Japanese tidying guru. Last autumn I read her declutter manifesto, The Life-Changing Magic of Tidying, and since then I have applied her simple test to everything I own. I have sifted through all my belongings, asking of each item: does this give me joy? If not, I carted it off to the dump. As not much of what I owned gave me joy, my house is now almost empty, which does give me joy, in a surprisingly large quantity.

What, I wonder after my visits this morning, would happen if you gave your stuff the Kondo treatment? Would you end up chucking it all, too? Or does all of it really give you joy?

That’s all for now. I’ve been direct with you, and I hope you’ll return the favour. Tell me honestly — what did you think of my house? I really want to know. Please reply quickly 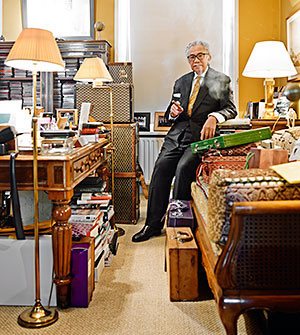 David Tang in the office/study of his Chelsea home

First, I only have three more homes, not five: two in Hong Kong and one in Beijing. And none in Noo Yawk.

But thank you for showing me your one home, whose manicured tidiness offered, I admit, a sense of calmness but also a feeling of tedium. There was no immediate excitement and few surprises, except for the oversized Victorian sideboard in your hallway, which immediately jarred with a lot of your G Plan-ish furniture.

The most important point about my visit was that it confirmed to me your embrace of Kondo for her dubious principle of joy through decluttering. Doesn’t that make you a slave to possessions when possessions should be our slaves?

Also, as a Chinese, I have never really trusted the Japanese. For a start, the world’s most cluttered department store, with far more stock keeping units than any other in the world, is of course Tokyu Hands. I love that store in Tokyo and spend hours rummaging through its vast range of goods. What would Kondo say about this quintessentially Japanese institution? She certainly wouldn’t be engaged as a merchandiser there. Imagine the horror of a total depletion of choices!

When my wife suggested to me the possibility of being “Kondonised”, I immediately resisted because I adore being surrounded by masses of stuff, so that I don’t have to be bored by looking at empty walls or pieces of furniture with nothing on or in them. Just think of the anticlimax of opening a large drawer only to find, as I did in your set of drawers next to your bed, just a few rolled up bundles of your husband’s monochromatic underpants — and a half empty drawer. If you opened mine, it would offer you a whole range of socks: from thick to thin, from long to short, from wool to cotton, from black to white, from yellow to blue, from plain to patterned. It’s like Aladdin’s cave and who wouldn’t want to stumble into Aladdin’s cave?

No, I don’t need tidying up. Beethoven never did. Nor Brahms nor Einstein. They all lived among piles of stuff. If such maximal environments were good enough for them then they’re good enough for me. Stuff the Kondo, I say. 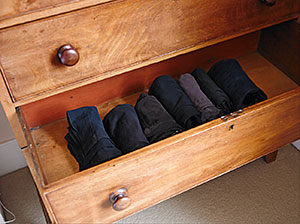 Kellaway’s trousers rolled up in a bedroom drawer

So sorry to have slightly overestimated the size of your property portfolio. In return, may I correct a couple of minor misapprehensions you have about my house? First, what you saw in the drawer were not my husband’s underpants but my trousers. Second, it’s Ercol, not G-plan. And, finally, my mother would have been most distressed to have her aunt’s 18th-century oak dresser described as an oversized Victorian sideboard. The reason it survived my recent cull was because it gave my mum joy. Kondo would not approve of such sentimentality, but I’m not such a slavish disciple that I have to follow her in everything.

I note you enlist Beethoven in your defence. Granted, he wrote some fine music without being a neat freak; but equally he didn’t spend his life wasting time shuttling between half a dozen different homes, and I very much doubt if he started each day dithering over a vast choice of socks. 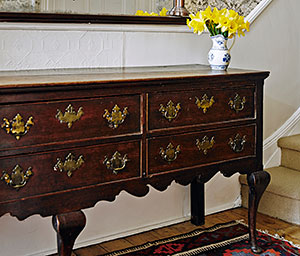 You are evidently pleased with your sock collection, but your drawer was so full it was difficult to open; I bet there are 100 pairs at the bottom that you haven’t seen in decades. My objection to all this isn’t waste, it’s inefficiency. You told me that you recently bought a new suit and then promptly lost it. It took your wife and staff three days to search among the 100-plus you already own before it turned up. Isn’t that evidence enough?

And mentioning your wife again brings me to a final point. Your way of living imposes a cost on your family — and on your staff. When I asked your housekeeper if you should have less, she rolled her eyes in agreement. Perhaps in the end you and I are similar — both being selfish in imposing respectively extreme disorder and extreme order on those who live with us.

Should we both mellow a touch in their interests? 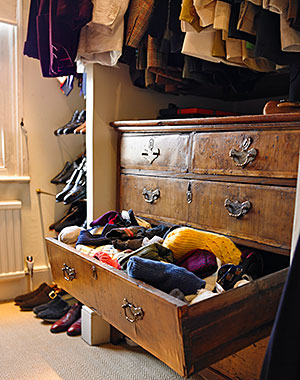 So you wear the trousers. Nevertheless, since you snitched on me by telling my wife in a FaceTime conversation about my two hidden warehouses, perhaps I should, for the benefit of your husband, reciprocate your underhand move by exposing your confession to me that, when he is at work, you regularly select various possessions of his and secretly dispose of them.

I suppose I must take your word for it that your oak old dresser is 18th century, although it doesn’t detract from the fact that it is too rustic and bulky in your hallway. Even by your own admission, it deserves culling under the Kondo principle which does not allow for “transferred joy”, which you impute to your mother. It’s no good preaching the Kondo creed if you conveniently ignore it when it suits you. And there lies your Achilles heel: that your life should be shaped by an arbitrary evaluation against which you end up cheating.

As opposed to such a slippery slope, we keepers of possessions are free from any fetters — we have no urgency to get rid of anything at any time. We stand fast on what we choose to keep and have no compunction to act as hoarders. I call it lazy freewill which is a real luxury. If the price of this is to have a drawer jammed full of socks which might never see the light of day then I draw comfort from the fact that our ocean floors are buried with immense biodiversity of which we know nothing.

Furthermore, we love the serendipities and sense of frisson arising from the sudden discovery of things we had long forgotten. These are sensations you miss out on because you have thrown away most of your things and will never suddenly come across them again, and if you do remember any of them, you can only wallow in nostalgia and regret. 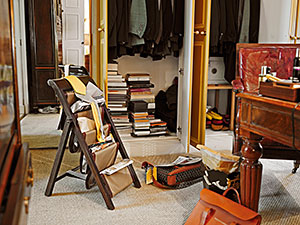 Tang’s books and suits packed into a wardrobe

And you need not shed any sympathy for those working around me. They know they are not expected to do any real tidying up, especially with my books, pictures or clothes that happily remain piled up or stuffed up until further notice, which is usually a long time. Therefore, they only attend to surface cleaning, whose spring never seems to come. This laissez-faire attitude lightens their workload and I should be credited for being considerate.

So please, as your new best friend, even if we disagree on the stuff of life, I beg you not to slide down that inexorable path of gradual elimination. It’s a dangerous tendency to “tidy things up”, when that job should only be properly handled by the henchmen of the Yakuza.